Home » DSLR Vs Point And Shoot Camera: Which Camera To Invest In?
0

Has spending hours scrolling through Instagram inspired you to invest in a better camera finally? We don’t blame you.

The advent of images online shows us just how expressive a photo can be – and you don’t need to be an award-winning photographer to take them. All you need is a good camera, right?

By now, you’ve noticed that many of the amateur and professional photographers who take the best pictures do so primarily with a DSLR and occasionally with a point and shoot. But what’s the difference between the two, and what does it mean for your photos?

Keep reading to find out.

Quick Navigation
What’s the Difference:  DSLR VS POINT AND SHOOT
Pros and Cons of Point and Shoot Cameras
Pros and Cons of DSLR Cameras
Ask These Questions Before Buying a DSLR
What Will You Choose?

What’s the Difference:  DSLR VS POINT AND SHOOT 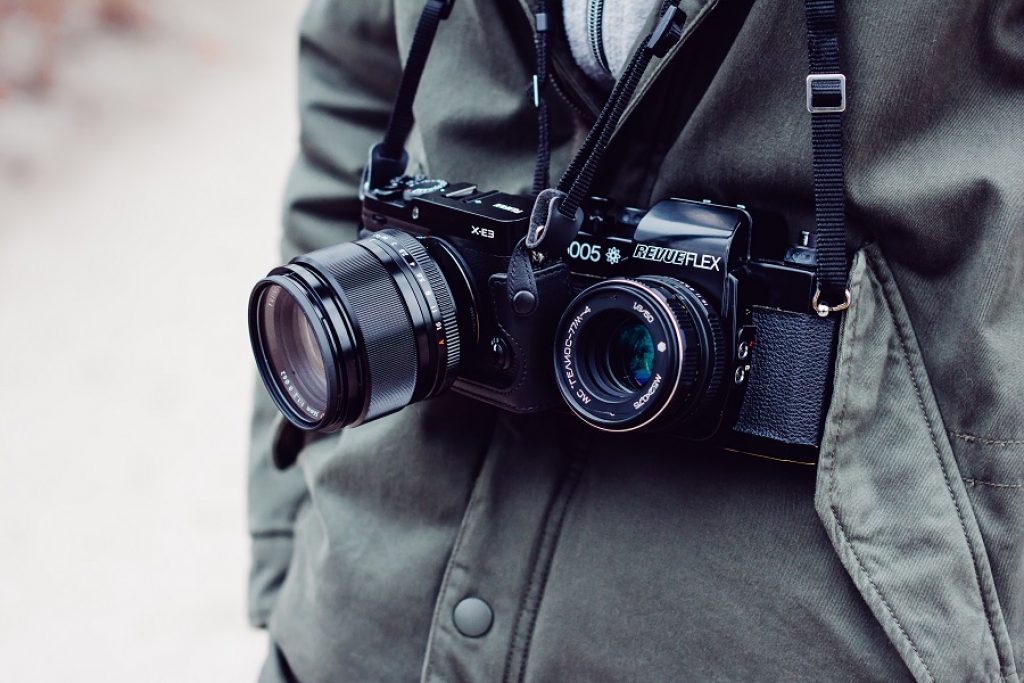 You’ve seen DSLRs in your daily life: they’re carried by professional and amateur photography enthusiasts alike. But besides the air of credibility they add, what’s the difference between a point and shoot and a DSLR camera?

While there are plenty of differences, which we’ll cover later, there are two important aspects to cover that define the category distinctions: lenses and sensors.

While there are many little differences, there’s one major thing that sets these cameras apart: the lens.

A point and shoot camera is also known as a “fixed lens” camera. These cameras include one standard lens that can’t be changed. Users can adjust the zoom and other features, but you won’t change the lens.

DSLR cameras don’t come with an automatic lens: it requires manual adjustment of the lens whenever you take a shot. You won’t necessarily adjust it for every single shot, but it requires fiddling with manual settings when you need to change focus. 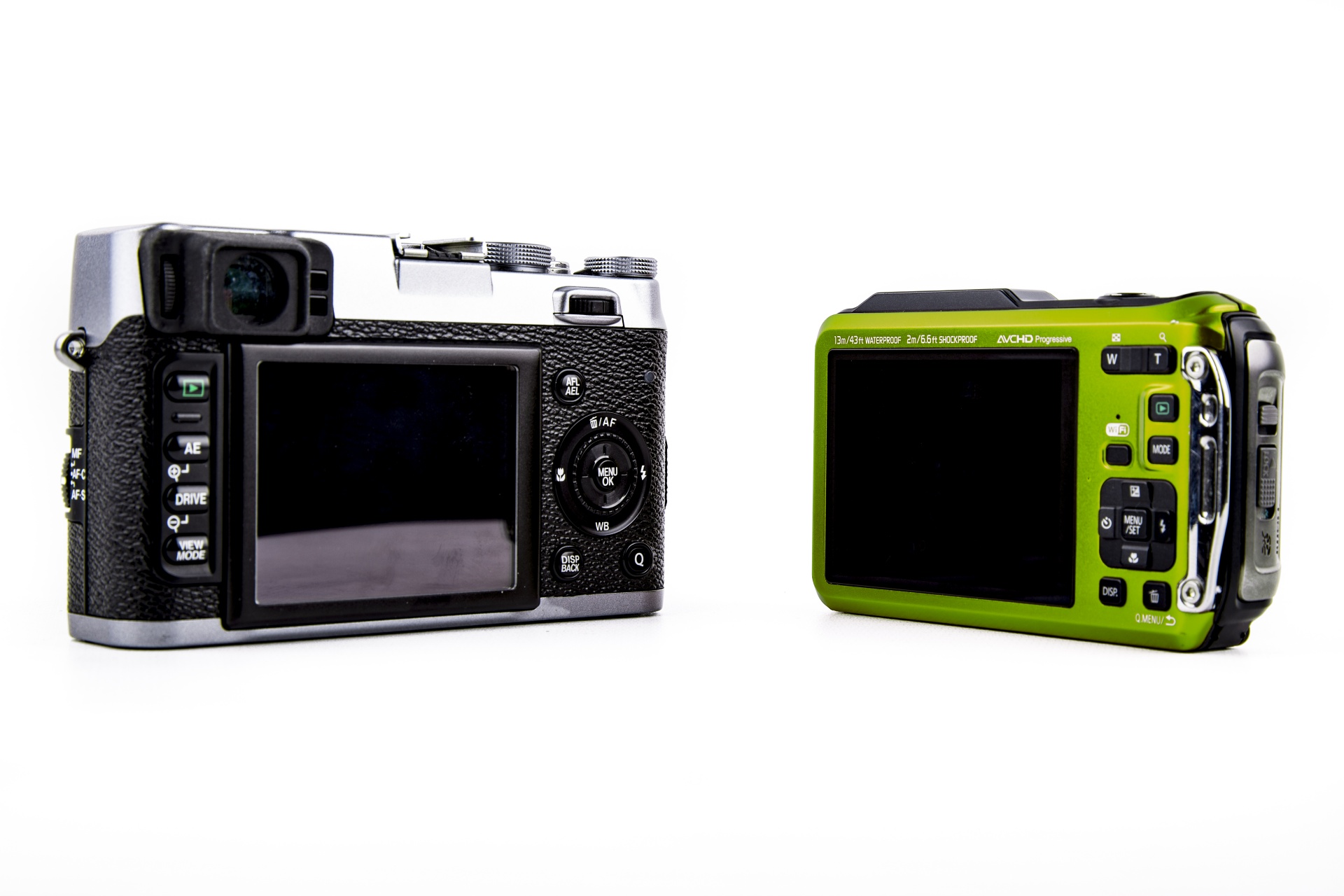 A DSLR doesn’t only require manual adjustment: you’re able to buy a whole host of lenses to accompany your basic camera. Interchangeable lenses are another key difference between these cameras and any point and shoot camera. With the chance to change up the lens, you’re better able to optimize your camera for the exact conditions you’re working in and generate a better photo.

There are other differences between the two, but many of these differences are the direct result of the fixed vs. interchangeable lens. For example, a DSLR’s optical viewfinder shows you the image produced by the lens whereas the point and shoot provides an electronic viewfinder.

On the whole, DSLR cameras have bigger, better sensors than a point and shoot.

Why does the sensor matter? The sensor determines the light used to create the image, therefore, a larger sensor lets in more light when required. More light generates more information which in turn creates a better image. 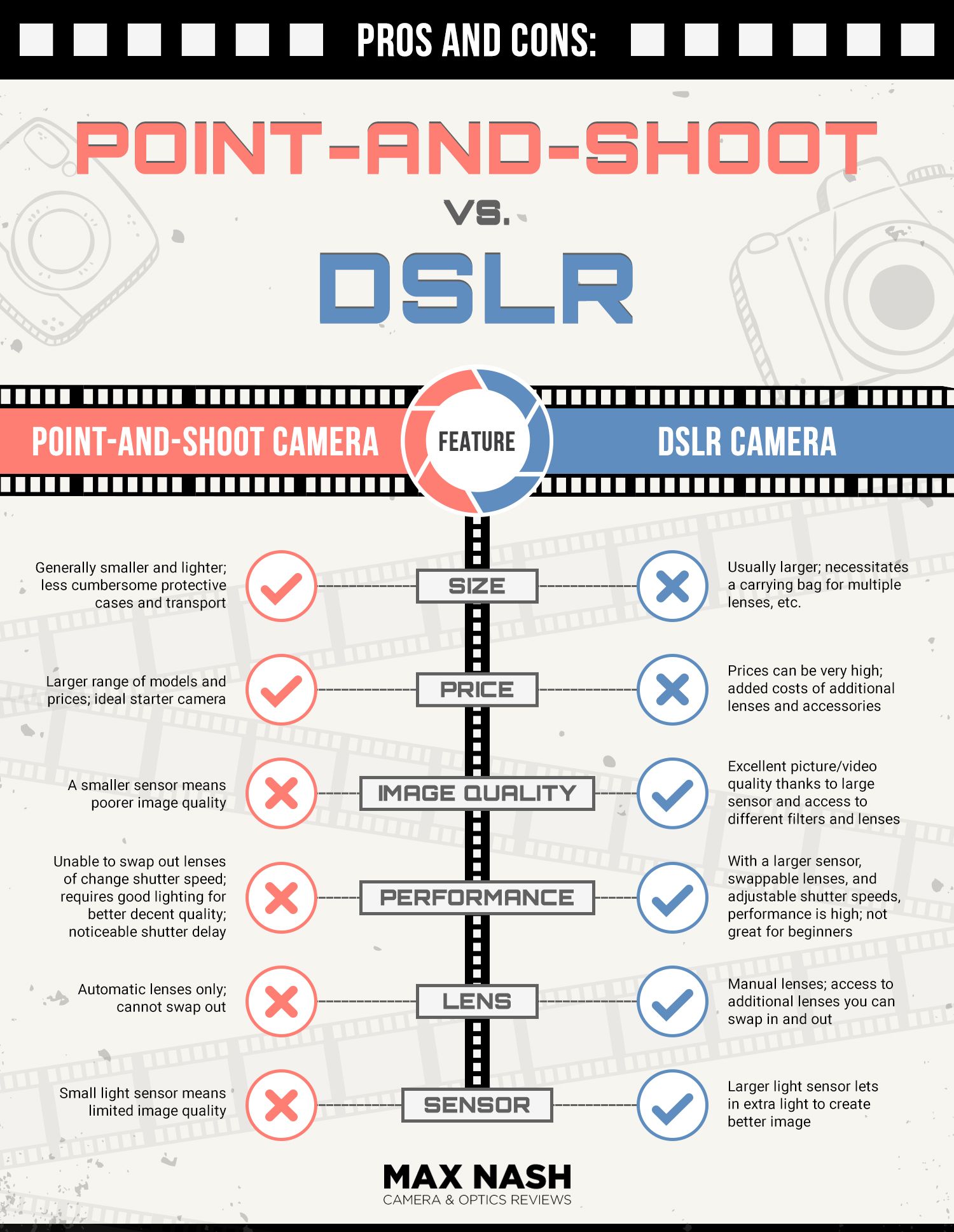 Pros and Cons of Point and Shoot Cameras 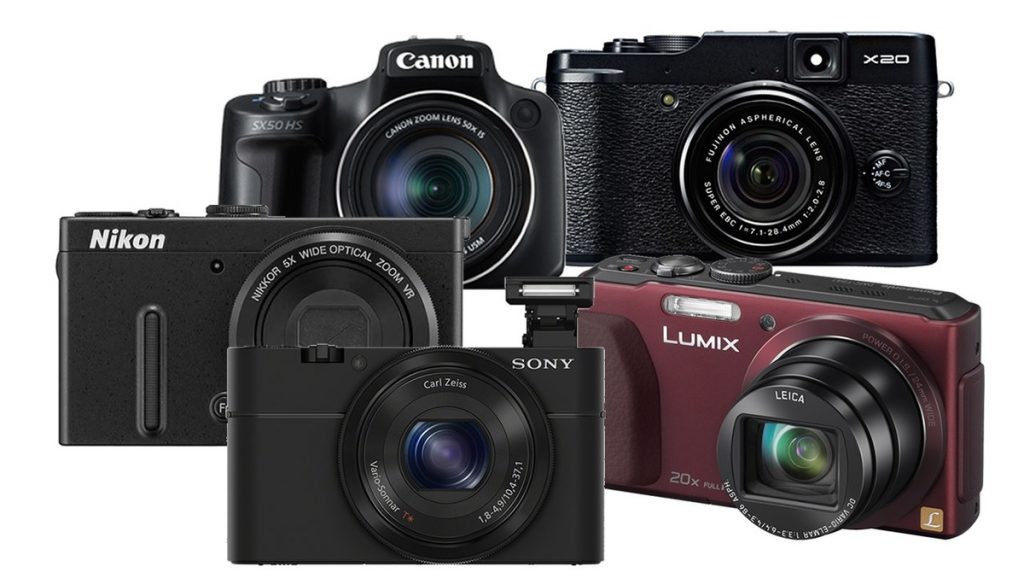 Professionals are more likely to opt for a DSLR camera, particularly for high profile events or tricky shoots like nature shoots. However, it doesn’t mean that a point and shoot camera is necessarily a worse camera – though, image quality and performance will naturally suffer with a point and shoot because they’re difficult to optimize. Instead, it’s important to think about these pieces of equipment within the context of purpose for use.

In some cases, a point and shoot camera makes far more sense to use than a DSLR, even if the image quality may suffer. The same is true in reverse as well.

PROS OF POINT AND SHOOT CAMERAS

In our opinion, there are two primary pros to point and shoot cameras: size and price.

Point and shoot cameras will almost always be smaller and lighter than a DSLR. Plus, the DSLR requires accessories like lenses that need to travel with it for everything to work. Typically, a DSLR requires a bag not just for carrying but for safety. A designated bag protects it from dirt, dust, and any damage caused by daily use.

There’s no inconspicuous way to carry a DSLR unless you put the bag in a bigger backpack. Then, when you want to take a picture, you’ll need to stop, unpack, set up, and re-shuffle. It's not a big deal for portrait shoots or planned outings, but you won’t capture something in passing the way you will with a point and shoot.

Point and shoot cameras range in size with some being small enough to practically (but not necessarily safely) fit in your pocket. They’re easy to put in a purse or small bag, and protective cases typically add neither heft or bulk to whatever you’re carrying.

So, if you want to carry a camera around with you as you wander a city, attend a party, or just to capture your day, a point and shoot offers a size that works.

The second benefit of buying a point and shoot is saving money. Point and shoot cameras now ring in under $ for very basic models with perfectly good cameras starting at $. Although the sensors tend to be small, the number of megapixels tends to make up for it to an extent.

If you want to capture vacations, birthdays, and life events and you aren’t bothered by images that don’t scream “professional,” then a point and shoot is the perfect option.

Plus, there are opportunities to scale. These cameras range from basic cameras limited almost entirely to zoom only options all the way up to those resembling a DSLR.

In other words, a good point and shoot is an excellent starter camera for practicing the basics of photography, and the low price doesn’t inhibit you from trading up later.

CONS OF POINT AND SHOOT CAMERAS

These cameras do come with a few drawbacks, primarily in image quality and performance.

Image quality is poorer in point and shoot cameras because they offer a smaller sensor. While some cameras can imitate DSLR-quality photos, many require a combination of perfect lighting, timing, and optimization to do so.

You simply won’t get the same stellar picture with a point and shoot that you will with a DSLR.

Performance is the second disadvantage. Because there’s no opportunity to change the lens or shutter speed, you’re subject solely to the built-in settings. You’ll find that these cameras perform best in good lighting without flash, even though there’s still a delay.

Add in poor lighting and flash, and you’ll see a delay of several seconds between pressing the button and the capture. In that time, you could well have lost the subject of your photo.

Pros and Cons of DSLR Cameras 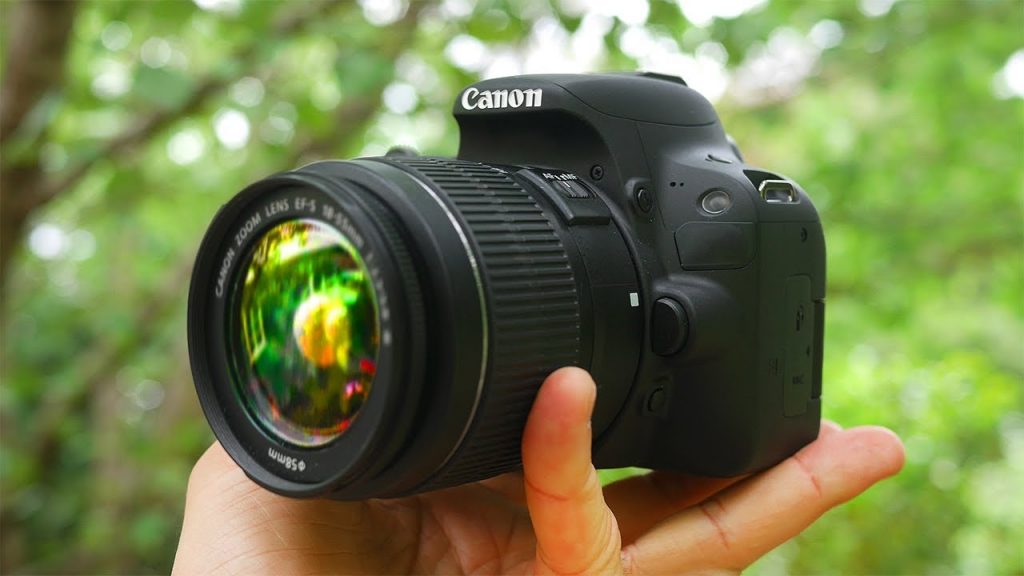 As pointed out earlier, DSLR camera offers a very different experience and a different photo from a point and shoot.

PROS OF A DSLR

The pros of the DSLR include both image and video quality: DSLRs offer better control over your exposure to generate high-quality video and stills. You’re getting a better picture by miles simply because of the sensor and the ability to adapt the lens to the setting – not to mention all the other available features not found on automatic cameras.

CONS OF A DSLR

The only real con of a DSLR is the price. You’re not just investing in a camera – many require accessories that seem never-ending. However, if you have a legitimate use for the camera, these costs will add value to your photography, which will pay off particularly if you’re using it for business.

Ask These Questions Before Buying a DSLR 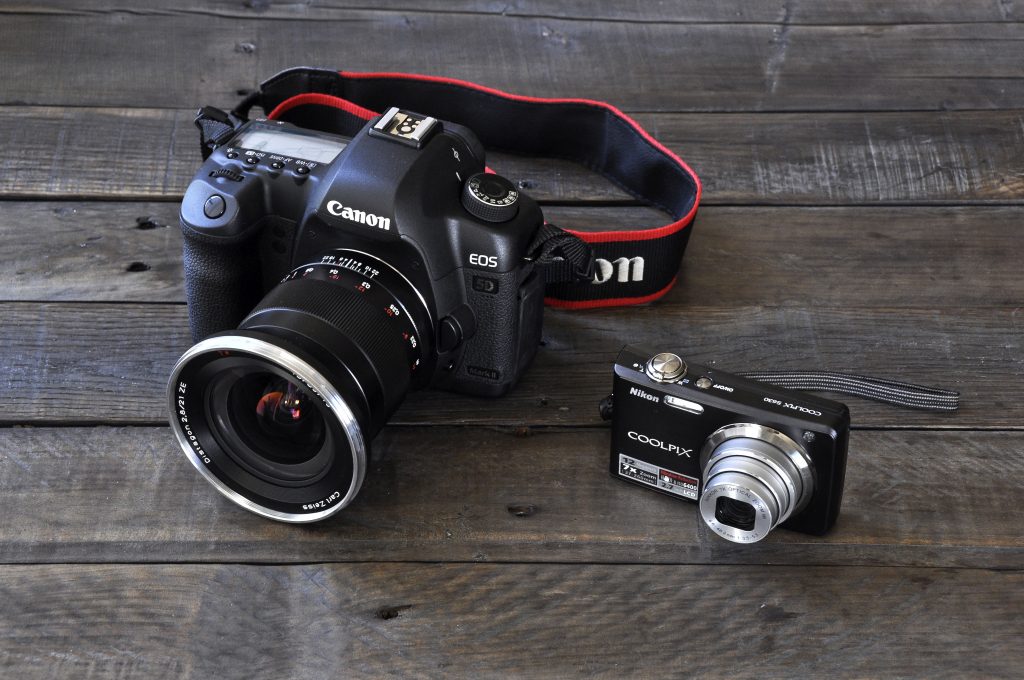 Although there are many differences between point-and-shoot cameras and a DSLR, it’s impossible to say one is overwhelmingly better than another. The truth is that it depends on your needs, skills, and abilities.

And honestly, there’s little worse than spending over $$$ on a camera that doesn’t ultimately add value to your life.

Before taking the plunge, ask yourself some of these important questions. Be honest with yourself about whether the strength of your desire for a DSLR is what’s driving your need, and whether that’s enough to make the investment worth it.

A few questions to ask yourself (and anyone you share finances with):

Only you can answer these questions for yourself. Write down the answers as a way of holding yourself more accountable and encouraging honesty. Then, go back and look at the pros and cons of each option while keeping your answers in mind.

What Will You Choose? 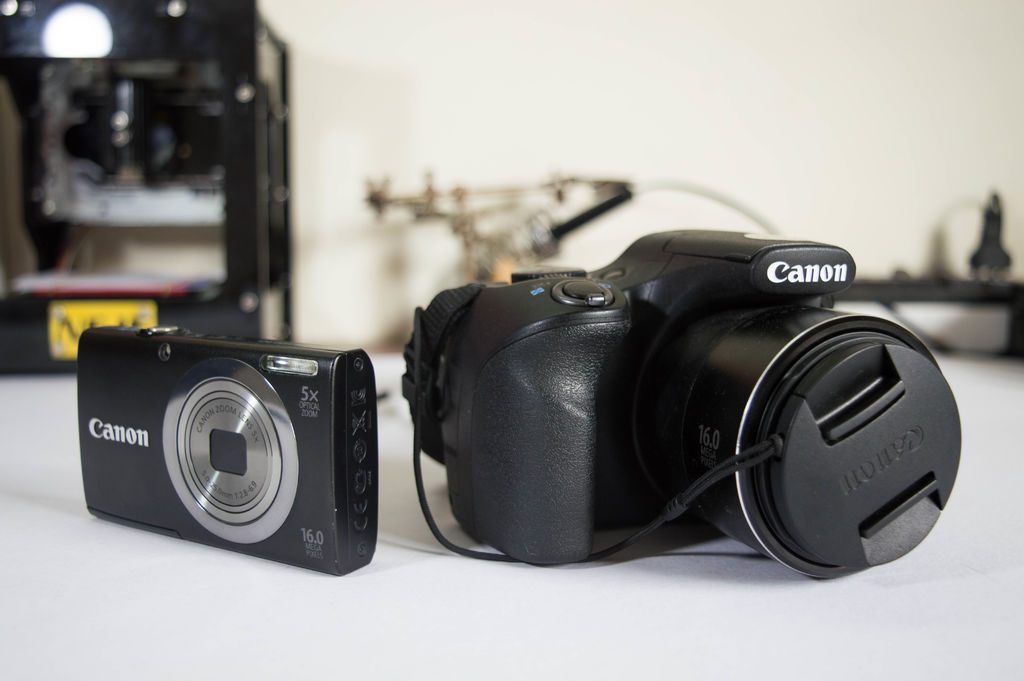 Both camera options have as many pros as they do cons, so it’s important to choose the camera best suited to your needs. After all, there’s no point in buying a camera that you ultimately can’t or don’t use.

Are you thinking about making the leap from point and shoot to DSLR? What’s holding you back? Share your thoughts in the comments below.