What Is The Fujifilm X100F And How Does It Work?

The Fujifilm X100F is the latest addition to the X Series. It stands out from previous models thanks to its advanced image processor and performing 24.3-megapixel sensor.

The X Series is known for the quality of the image sensor and image processing engine. These two features result in high-quality images.

These cameras are also known for the quality of their lens, and for the possibility to switch between an electronic and optical viewfinder for a more traditional experience.

The X100F model stands out because the sensor and processor are more performing than ever before.

You can expect to get even better images than with previous iterations of the X Series. The color and tone reproductions are virtually unmatched, and you will find this same quality when you record videos.

There are other improvements worth mentioning. The shutter release time is lower than before, but this is a difference you probably won’t notice.

The number of focusing points used in autofocus mode is interesting. A total of 40 percent of the image will be covered in focus points when you use this mode.

The only drawback of this advanced camera is its battery. The Fujifilm X100F 24.3 MP Digital Camera – Silver comes with a 1,260 mAh battery. It will last for 270 to 390 shots depending on the viewfinder you use. We were hoping for a longer battery life given the price of the camera, but this is something that can easily be remediated by carrying an additional battery.

What Makes The Fujifilm X100F Unique?

The 24.3-megapixel sensor is what you can expect to find for a camera in this price range. This feature is still worth mentioning since it delivers the kind of image quality that a professional would look for.

Other mirrorless cameras typically use a low-pass filter. These filters eliminate false colors and improve color reproduction, but the Fujifilm X100F doesn’t need a low-pass filter thanks to its performing sensor. The ISO range of the camera also means you will get flawless results in low light settings. The ISO ceiling is 51,200, and you can expect low-noise images with a smooth transition between colors and tones, no matter how dark the scene is. The camera features a dial so you can adjust the ISO setting manually.

The aperture of the lens is f/2.0. This fast lens is perfect for action shots, especially once it is combined with the fast shutter speed of the camera.

We like the Film Simulation modes of the camera. This feature is similar to what other manufacturers call filters or color profiles.

The Film Simulation mode converts your image files to create different effects. You can snap pictures with true to life colors, add a sepia tone, or explore other effects. We like this feature because it adds effect to your images without sacrificing resolution.

The results are noticeably better than when you edit images with software, and the Film Simulation modes stand out with the way highlights are treated.

There are other features that make the Fujifilm X100F an interesting choice. You can, for instance, adjust the focus of the camera without losing your composition thanks to a small focus lever.

If you are worried about the slight displacement that sometimes happens when using a traditional viewfinder, you should know that there is a built-in correction mechanism to prevent this from happening.

We also found the autofocus feature interesting. You can choose from six different autofocus modes that use different configurations for the focusing points. You can use one of these modes to track a subject across your field.

You can also use the camera to record HD video. You can choose from six different frame rate settings, use the Film Simulation modes on your videos, and adjust different settings when recording, such as aperture, shutter speed, exposure, and more.

How Much Does The Fujifilm X100F Cost?

Prices vary a little more one seller to another but expect to spend at least $1,000 for this mirrorless camera. The Fujifilm X100F is an investment, but we think it is well worth it.

Most reviews mention how fun the camera is thanks to its manual controls. Photographers truly enjoy using the camera and experimenting with the different settings. The results are rewarding.

People love the image quality, even in low light settings. Some reviews also mention the autofocus features and how they open up new opportunities.

Photographers think this is the perfect mirrorless camera for those who want manual controls. They also like the retro design of the camera and its compact size.

Experimenting with different features and settings is something that is frequently mentioned in reviews. There is a real artistic process that goes into creating a composition and using the manual settings to create a unique shot.

Overall, people are impressed with how the camera performs and feel the price tag is fully justified. Those who used previous models in the X series notice some improvements with the X100F.

There are a few downsides mentioned in some reviews for the Fujifilm X100F. The main drawback of this camera is the learning curve.

This camera is for those who want more manual controls. You need to take the time to become comfortable with the camera and its controls, even for using automated features such as the autofocus.

If you have never used a high-end camera before or have more experience with DSLR cameras, you will need to spend some time experimenting and exploring the settings and controls.

Some reviews also mention the small size of the camera. This can be a drawback if you are more comfortable with a large camera.

The price tag is sometimes mentioned as a negative point. There are more affordable options to explore if you aren’t looking for this kind of performance.

How Does The Fujifilm X100F Compare To Other Cameras?

We looked for mirrorless cameras with similar specs. The Fujifilm X100F is one of the best cameras on the market, but there are other options to consider. 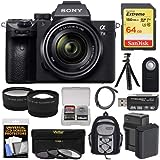 The 24.2-megapixel sensor delivers a similar image quality. This is the highest resolution you can expect to get with the current generation of mirrorless cameras.

You can also use the Sony Alpha A7 III to shoot 4K videos while the Fujifilm X100F delivers a lower resolution.

The autofocus feature of the Sony Alpha A7 III is often mentioned as a positive point in reviews, but you won’t be able to choose between different autofocus modes like with the Fujifilm X100F.

However, the Sony Alpha A7 III has a more advanced stabilization system. There are five axes that stabilize the image.

The Sony Alpha A7 III is for advanced users. This mirrorless camera is worth considering if you want a higher ISO ceiling and more precise controls but don’t mind using a digital menu instead of manual controls. 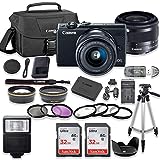 The Canon EOS M100 features a 24.2 megapixel processor, which is similar to the Fujifilm X100F. The autofocus feature is excellent for the price range of the camera, but don’t expect the same performance as what the Fujifilm X100F delivers.

The resolution is comparable, and you can also record 1080p HD videos. However, the ISO ceiling is lower than what you get with the Fujifilm X100F since the Canon EOS M100 has an ISO ceiling of 12,800.

The Canon EOS M100 features an LCD monitor, but you won’t get a traditional viewfinder. The lens performance is also different since it is a f/3.5 lens. Note that you can upgrade the lens of the Canon EOS M100 with different kits.

The shutter speed is much slower, and there are no advanced features like the Film Simulation modes. However, the Canon EOS M100 is a good compromise between price and performance.

Few mirrorless cameras deliver a performance that is comparable to the Fujifilm X100F. This camera is an investment, but this is an investment you will be happy with. This camera stands out from other models due to the image and color quality you can achieve in a wide range of light settings.

This camera is definitely worth its price tag thanks to the performing sensor, advanced autofocus modes, and the Film Simulation features. We also like the manual controls, the two viewfinders, and the compact design of the camera.

In the end, the Fujifilm X100F is an excellent choice if you are looking for a high-end mirrorless camera. Fujifilm is one of the best brands on this market, and the X100F is one of the most performing cameras you can find. Besides, the manual controls and traditional viewfinder make this camera fun to use and will make you want to explore the many possible configurations. 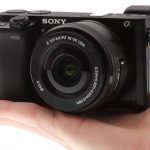 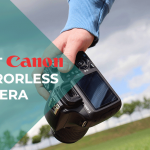