Quick glance at the improvements

The Fuji X -E2 takes over from the Fuji X -E1 incorporating improvements that we have seen in the Fuji X100S such as the 16-megapixel X-Trans CMOS II sensor, the phase detection autofocus system, the target modulation optimizer to combat diffraction, and the manual focus assistance using the split image system. From the Fuji X-M1, the X –E2 takes the WiFi module that allows for the sharing of photos wirelessly to the computer or mobile. 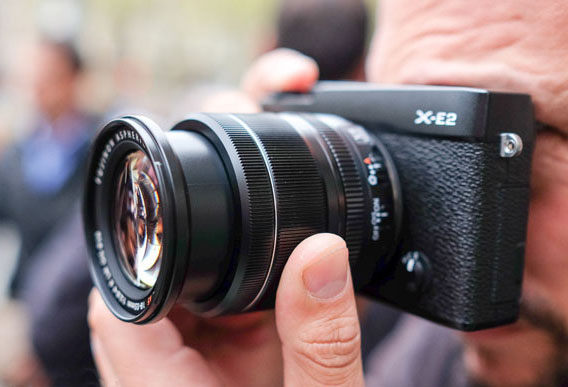 On the other hand, the Fuji X -E2 retains the most successful features of its predecessor: the 2.36 million-pixel electronic viewfinder, and a magnificent contrast of 1:5000. The viewfinder has an improved refresh rate especially in low light. Overall the impression is that the view is clear and bright in all settings, and especially indoors. And another interesting option is that the viewfinder now has an automatic-on mode. That is, the screen being off, the viewfinder becomes active only if one takes the eye piece close to the eye. Ideal for battery saving mode.

Speaking of improvements over the Fuji X -E1, the Fuji X-E2 gets the most of the EXR II processor to raise the burst rate to seven frames per second. Turn-on delay is reduced to 0.5 seconds. The interval between shots is reduced at 0.5 seconds, and shutter lag at 0.05 seconds. But a more gratifying progress is evident and that’s the speed of autofocus, which, according to Fujifilm, is achieved in 0.08 seconds with the Fujinon XF 14mm f/2.8 R lens, thanks to the phase-detection AF. 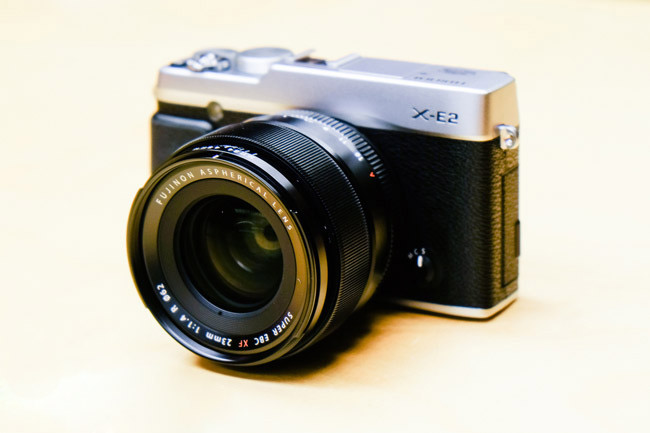 With regard to changes in body controls, we have to mention the increased area of the screen to 3 inches, the always welcome addition of the configurable Fn2 button, and a change of position for the Q (Quick Start) button, which is placed in a more accessible position for reach with the thumb. The LCD screen resolution reaches one million pixels.

We also have the same integrated flash and a magnesium alloy finish on the top and front. The body gives a sense of strength even though it is smaller and lighter than the Fuji X -Pro1. 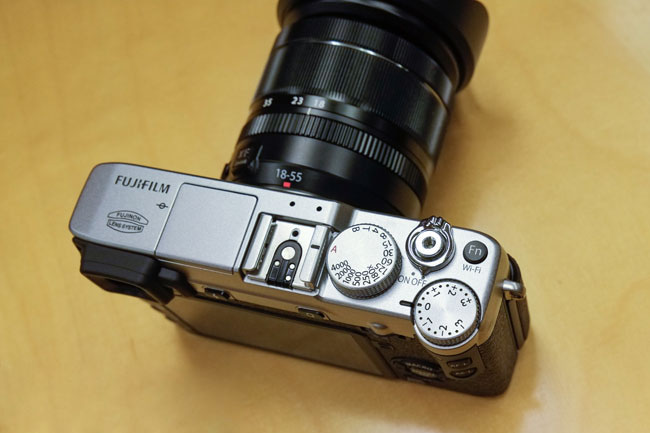 The point of novelty comes from the new generation X-Trans sensor. This is an X-Trans CMOS II sensor in APS-C size and 16.3 megapixels, which together with the new EXR II processor, manages information from over 100,000 phase detection pixels, achieving a marked improvement in the speed of focus.

Faster focus speed has been the main workhorse of the X series and with each generation, one can not fail to notice the remarkable effort put by Fujifilm in its improvement. This improvement is noticeable with the XF 18-55 mm zoom lens which is the most common optics that will be sold in a kit. Of course it’s next to impossible to exactly verify the autofocus timing of 0.08 seconds claimed by the producer, but with camera in hand, the autofocus does feel blazing fast.

Another area that is much improved is burst shooting speed, reaching 7fps, which makes the X-E2 a far more versatile camera with better options for action photography and sports. Coupled with the fast autofocus, the camera opens a wide range of possibilities and becomes a much more complete CSC camera.

The Lens Modulation Optimizer (LMO) technology improves image sharpness when working at small apertures. This digital algorithm corrects diffraction in all Fujinon lenses compatible with the X mount. Here is an example shown by Fujifilm on their official website: 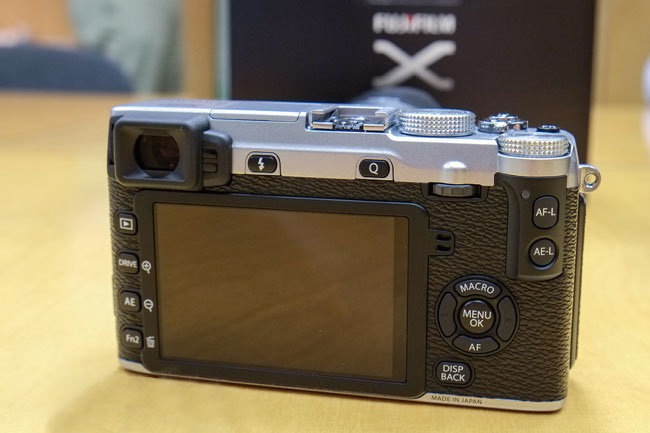 As a result of improvements in autofocus, the X-E2 has also improved its support for manual focus (when using the screen), now with a very helpful visual aid that allows greater accuracy, and that, coupled with the excellent Fujifilm lenses, invites more frequent use.

Video recording is one aspect that was taken a step forward in the Fuji X -E2. This camera allows recording in Full HD (1920 x 1080) at 60fps and at an enhanced bitrate of 36 Mbps. Video also comes with improved autofocus, that allows for faster, more precise and smooth tracking. This area was a little (read: a lot) behind the competition, so these improvements were more than required, although it is not a camera aimed at the fans of video recording.

Another option that’s been missing in X -E1 compared to other competing models was connectivity. Now the X -E2 incorporates the Wi-Fi feature for remote control or image transmission through the corresponding application, besides autosaving to PC (via router). The software can also use the GPS of the mobile phone to achieve geolocation of photos. 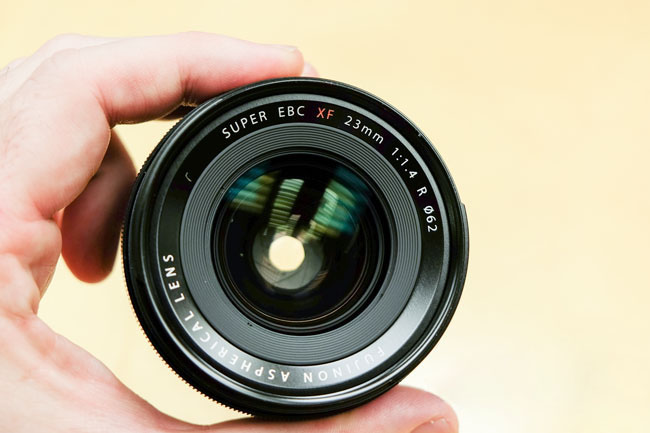 This new fixed -focus lens arrived to market at the same time as the camera. The Fujinon XF 23mm f/1.4 R was highly anticipated, as is equivalent to about 35 mm in full frame format and, therefore, is a traditional focal that was missing from Fuji’s line-up. The objective is imposing, with a high-quality build, solid, like the rest of the XF series.

You can check the lens’ extraordinary quality in the samples, and, paired up with the new Fujifilm X -E2, one can easily see why it became an object of desire for the enthusiast and the professional alike. 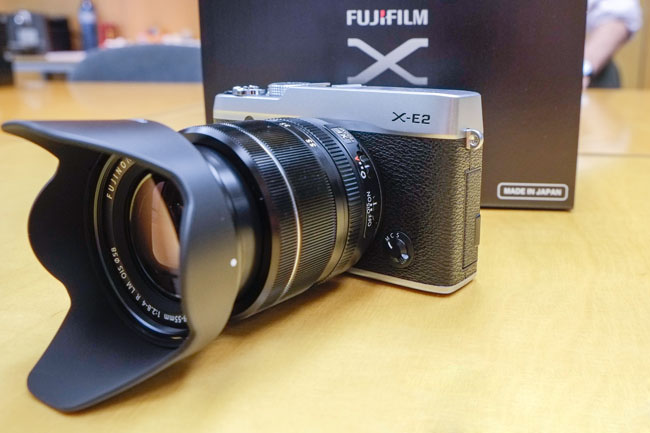 Is it worth renewing for users of the X -E1 or X -Pro1? Despite the improvements, overall the new model does not seem to warrant a change to these users. Improvements, especially in terms of focus, speed, and sensor quality are appreciated, but it’s more of a best bet for serious photographers who want to tackle the X series and seek a full option alternative. For the rest, it is a better bet to go for Fuji’s magnificent lenses, those present and yet to come, that together form a very interesting range for the lovers of high quality fixed focals to choose from.

As for results (as shown in the images below), the Fujifilm X -E2 maintains the same level of quality from the previous model, but with a very noticeable noise control, which is the main strength the X-E2 brings to the table.

Of course, the Fujifilm X-E2 came out a while back, with the company releasing quite a few more advanced models in recent years. Their line of mirrorless devices is especially great.

We highly recommend the Fujifilm X-T30, which is amazingly powerful and comes with impressive 4K video capabilities. If you’re looking for a more seamless experience and want to bring your photography game to the next level, this camera is a godsend. On the other hand, if you’re simply looking for a device that will help you improve your Instagram game, the Fujifilm X-A5 is a solid pick. It boasts an attractive, retro design and features a Portrait Enhancer for selfies, as well as an advanced autofocus mode.

That being said, the newer Fujifilm models are anything but cheap. If you simply want a camera that will prove to be a durable and versatile companion during vacations or day-to-day life, the X-E2 still fits the bill. Its compact design and user-friendly features will never go out of style.

There was an error connecting to the Amazon web service, or no results were found for your query. 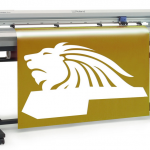 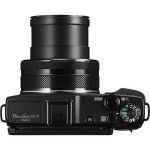