Home » Tackling And Answering The Question: What Does DSLR Mean?
0

What Does DSLR Mean?

DSLR stands for Digital Single Lens Reflex, and it is a type of camera favored by professional and amateur photographers alike. But what does DSLR really mean?

We’ve demystified the camera lingo to answer the question of what does DSLR mean in terms that a layperson can understand, while also providing advice and recommendations for purchasing your own camera.

So, without further ado, let’s explain what it is and how it differs from other types of cameras.

Quick Navigation
Digital Single Lens Reflex
What’s the Difference Between DSLRs and Point and Shoot Cameras?
Mirrorless Cameras
Which Camera Is Right for You?
Conclusion Digital single lens reflex refers to the technology used by the camera to capture a picture. We’ll break the explanation down into three parts.

Digital means that the camera saves pictures to a memory card rather than capturing them on film. To get technical, light passes through the lens to something called a CMOS sensor, which converts the photons into electrons and processes the images onto the memory card.

Reflex refers to light reflection using mirrors, which is how you're able to see an image through the same lens that captures the picture. One mirror takes the light from the lens and bounces it up towards the viewfinder. A second mirror turns the image around, so it isn't backward.

What’s the Difference Between DSLRs and Point and Shoot Cameras? Digital point and shoot cameras use multiple lenses. The first lens captures the actual picture, saving it to a memory card and, in many models, displaying the image on a low-resolution LCD screen. The second lens sends the image to the viewfinder.

Advantages of Point and Shoot Cameras

Disadvantages of Point and Shoot Cameras Mirrorless cameras are emerging as a sort of middle ground between DSLRs and point and shoots. They’re smaller and less expensive than DSLRs, but have swappable lenses and higher image quality than point and shoot cameras. Mirrorless cameras still can’t produce images of the same professional quality as DSLRs, but they could catch up in the future.

Which Camera Is Right for You?

Here are some factors to consider when you’re shopping for a new camera. Taking time to think about these things first can save you a lot of time and hassle.

How much are you willing to spend on a camera, and can you make more than a one-time investment? A DSLR camera will run you anywhere from $500 on up to several thousand dollars, depending on the model, and that doesn’t include lenses and other accessories.

On the other hand, you can get a highly-rated digital point and shoot camera for less than $300, and not have to spend a cent on extras.

How much time and energy do you want to spend on photography? Unless you’re already an expert, you’ll need to invest at least a few hours into learning how to use a DSLR camera. Otherwise, your picture quality may end up even worse than with a standard camera's auto-settings.

If you just want a camera you can pick up on a whim to take a handful of pictures, then a standard digital camera may be your best bet. If you'd like to learn more about photography and are willing to spend some time reading and practicing, you may find a DSLR camera more enjoyable.

Why are you purchasing a camera, and what kind of pictures do you want to take with it? For most people, their camera is just a tool for capturing moments in their families lives, and the only people who are going to view the pictures are other friends and family members. For these folks, convenience is more important than overall quality.

If you want your camera to produce images that are creative, artistic, or extremely accurate, you’ll need a DSLR. You’ll be committing more time, energy, and money, but if that seems like a worthwhile trade, then a DSLR is the right camera for you.

DSLR cameras use a single lens with multiple mirrors to allow you to view exactly what you’re capturing a picture of. They provide a high level of control over characteristics like shutter and aperture speed, focus, zoom, and depth of field.

Point and shoot cameras are smaller and lighter than DSLRs, and less expensive. They're easy to use and generally produce middling pictures regardless of the photographer's skill level. You don't have much control over the composition of the photograph, but the automatic settings are good enough for the average user.

A new species of camera called “mirrorless” cameras are becoming a popular middle ground. They offer the control and customizability of a DSLR camera, at the size and weight of a point and shoot, with a price and image quality that fall somewhere in between.

We hope our DSLR camera guide broke down the technology of digital cameras enough that you can purchase your own without needing to take a photography class first. Which camera is right for you? 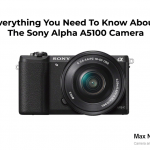